This document describes the procedures and functionalities for installation and operation of the Octopus Authenticator Mobile App, including:

The mobile device appears to be an ideal authenticator. However, first generation attempts at mobile authentication suffered from a single point of failure. One example was the reliance on SMS for authentication, which was proven to be easily hackable. Furthermore, the same held true for other approaches (keys, push notifications, etc.).

Secret Double Octopus introduced the industry’s first authenticator with multi-shield authentication for devices and users. The solution is flexible enough to support any desktop, backend application, VPN or cloud services, and focuses on the most seamless user experience possible.

Security benefits of the Secret Double Octopus solution include:

The solution architecture is outlined in the following diagram: 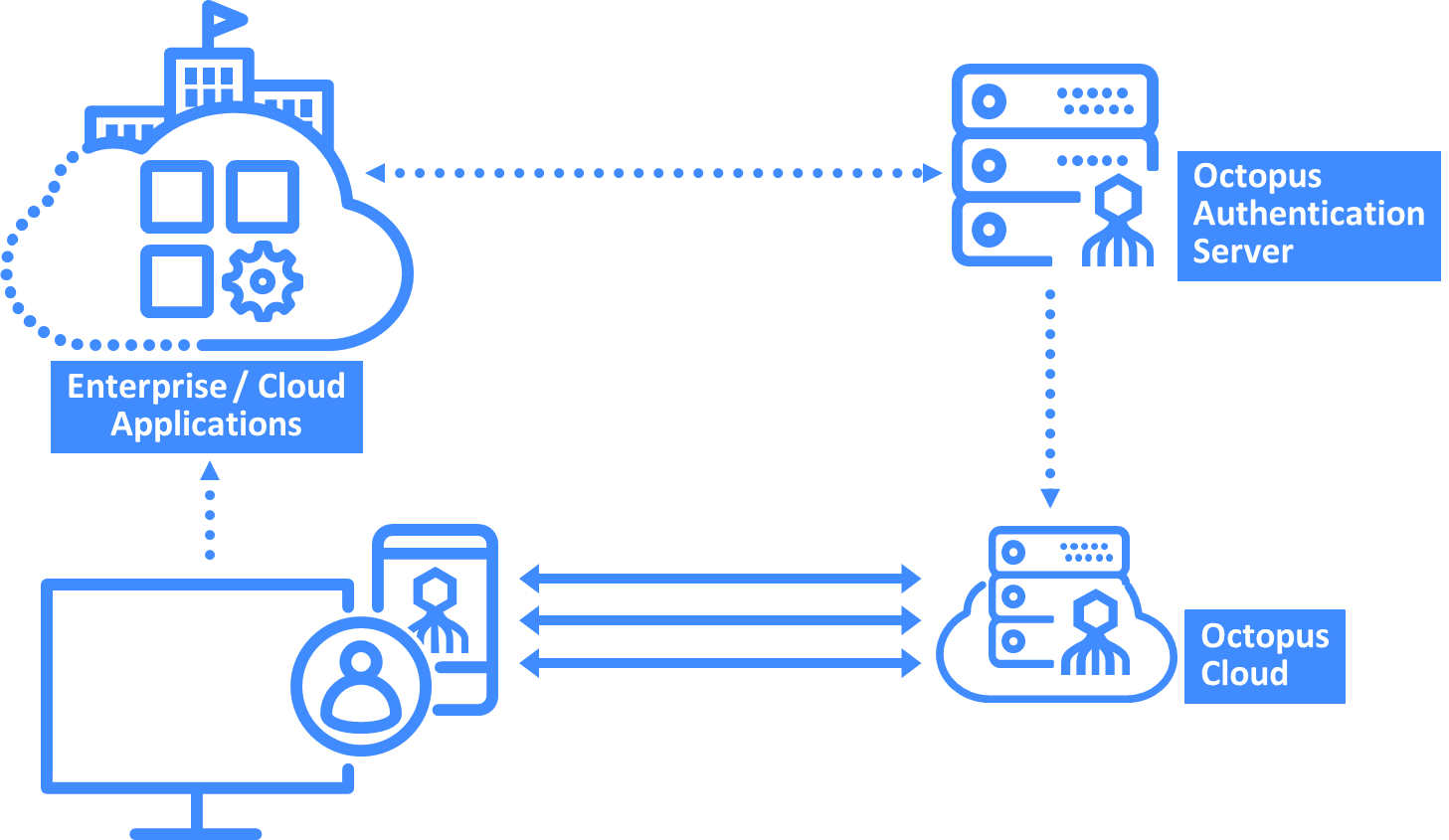 The Octopus Authenticator Mobile App can be downloaded from the Apple App Store or Google Play.

Octopus Authenticator App requires pre-enrollment to enable users to authenticate and approve transactions. The enrollment process is simple and secured to enroll a user with a specific device.

The user performs enrollment via an invitation email that is generated by the system admin. This email includes a welcome message and the following items: 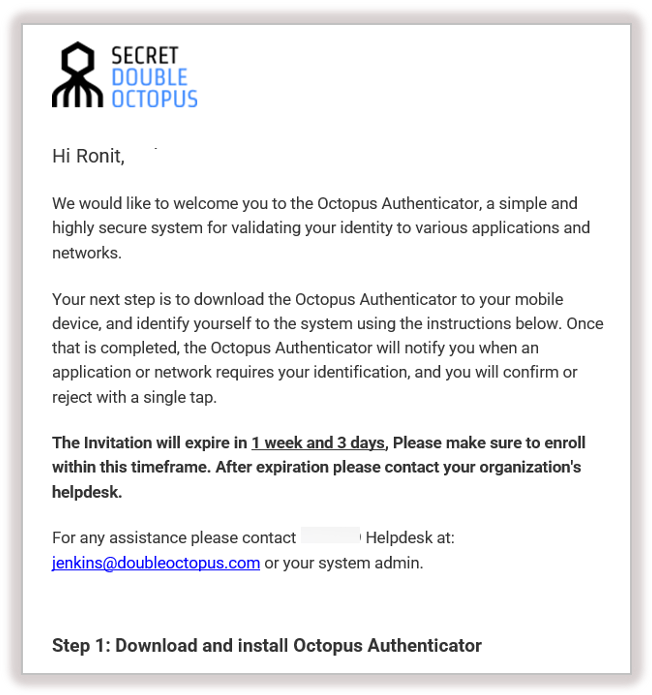 Users can enroll using any of these enrollment options:

Users receive a confirmation notification upon the first successful enrollment.

The procedure below shows an example of user enrollment using a one-time password (OTP), an enrollment method introduced in version 4.5.0. User enrolling using Passwordless authentication will not be asked for an OTP.

To enroll in the system (using OTP):

1. From your PC, open the invitation email from Secret Double Octopus and click the enrollment link. 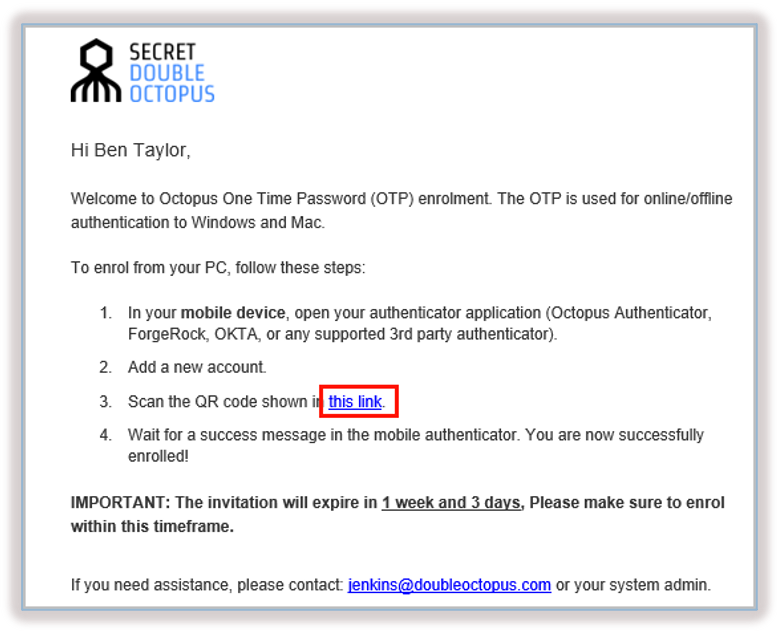 You will be redirected to OTP Authentication Registration in the User Portal. 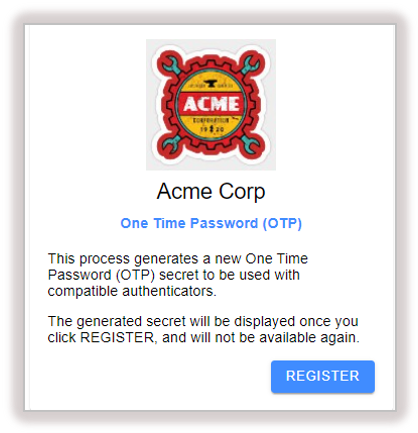 A QR code is displayed in the browser.

3. Open your authenticator application on your iOS device. (In this example, we use Octopus Authenticator.) On the Home screen, tap Add.

4. On the Add Account screen, tap Scan Code with Camera, and then scan the QR code displayed in your browser. 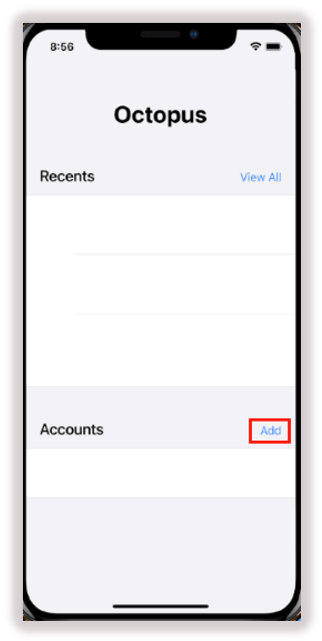 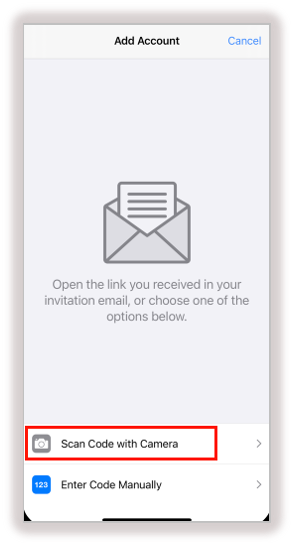 A confirmation message appears on the Add Account screen. 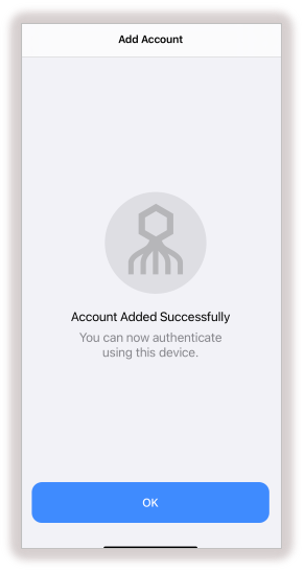 The newly added account is listed on the Home screen, with the OTP displayed. 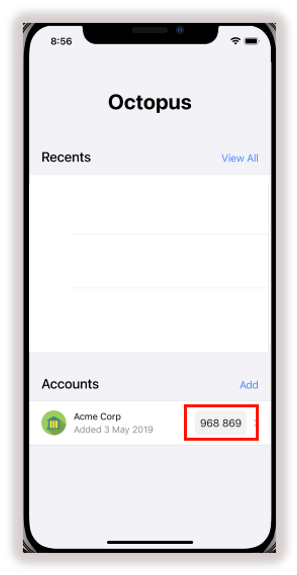 6. Go back to your browser and enter the digits of the OTP code. 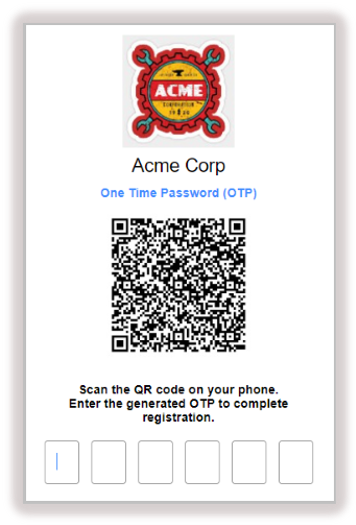 After you successfully complete registration, a confirmation message appears, and you can continue with login to the User Portal. 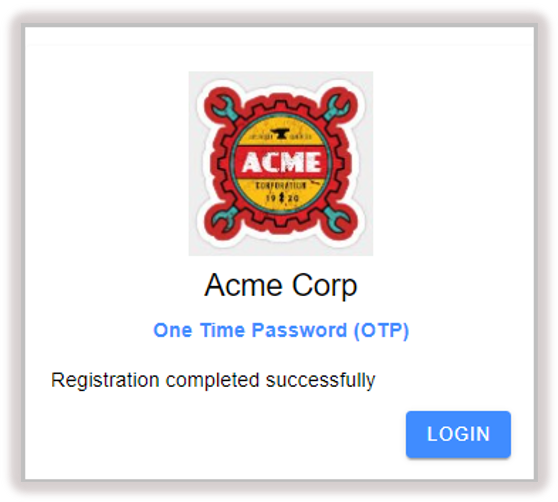 Once customers upgrade their Authentication Servers to the latest version, "loading" time is completely removed and users will be able to approve authentication requests immediately. 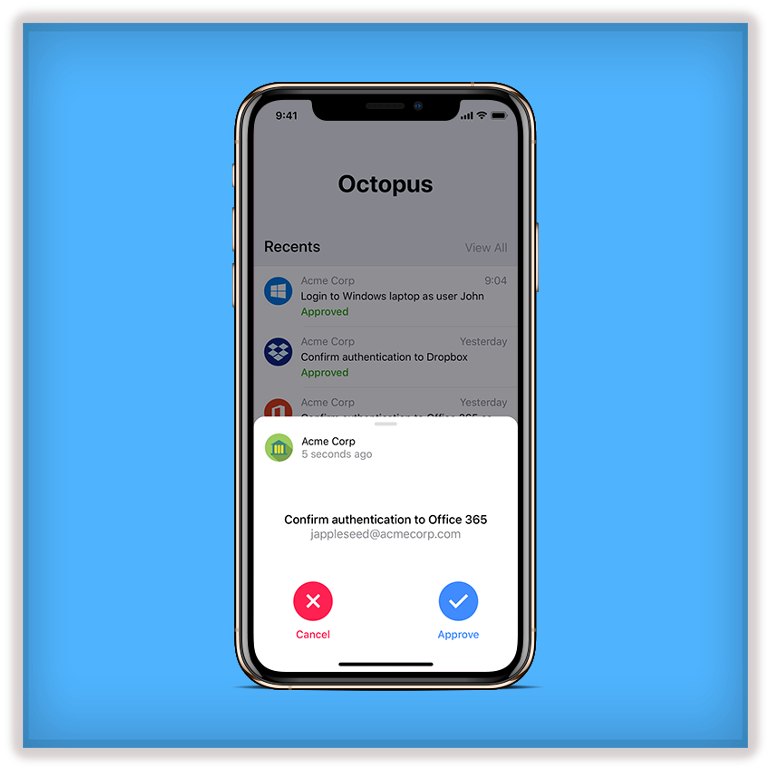 Handling Requests from the Push Notification

When the mobile app is not open, authentication requests can be handled directly from the push notification by force touching (or long pressing) on the notification bubble. This time-saving feature improves the perceived performance of the app. 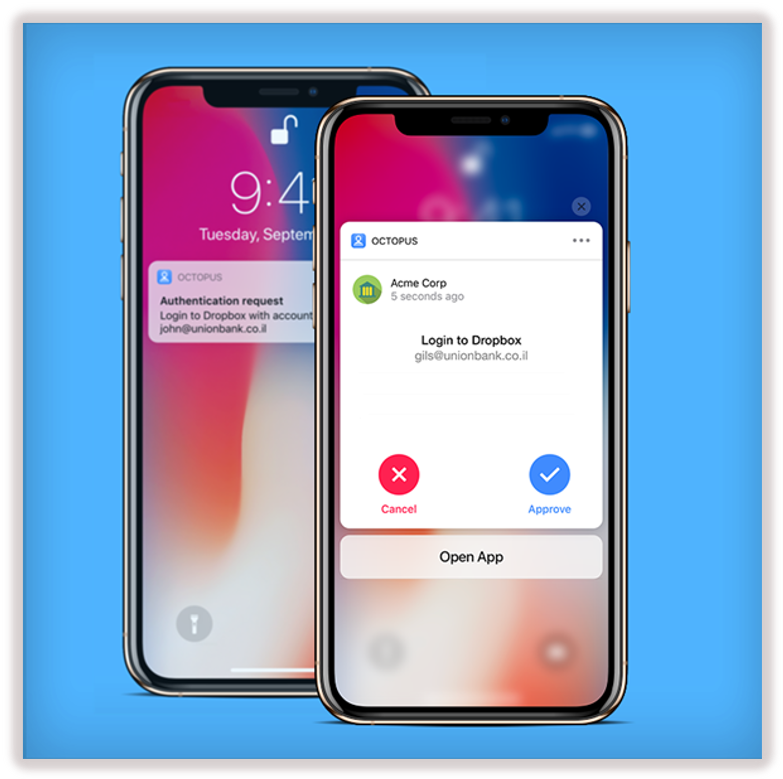 After users tap Approve, they are prompted to complete the authentication process by providing a fingerprint, face ID, or the code / pattern set used to unlock the phone. If more than one identification method is configured, users may choose which method to use.

Note: If an authentication request is received immediately after the phone has been unlocked (within approximately 15 seconds), users are not prompted to provide additional identification.

If the phone is locked and pairing with an Apple Watch has been done, the authentication request is automatically sent to the watch. For example: 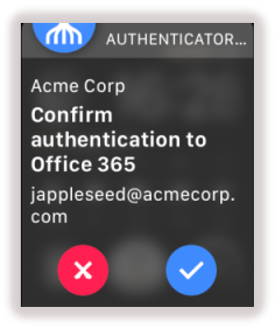 If the authentication request requires a verification code (e.g., OTP), the code is displayed on the Apple Watch. 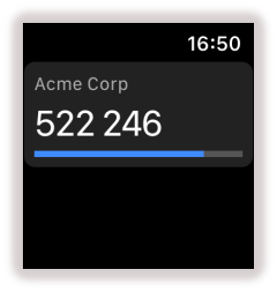 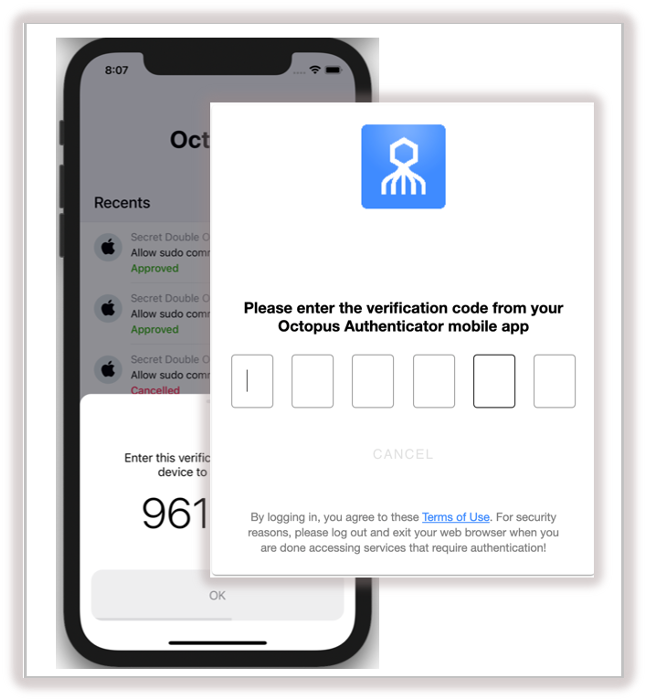 Following the first successful authentication, users are no longer required to enter a code if the browser or workstation is designated as a Trusted device.

The encryption mechanism ensures that the Octopus cloud infrastructure is not able to intercept or modify any authentication data. As a result, potential damage in the event of any vulnerability or attack on the cloud servers is greatly reduced.

Note: End-to-end encryption is relevant for Octopus Authentication Server versions 4.6.4 and above. 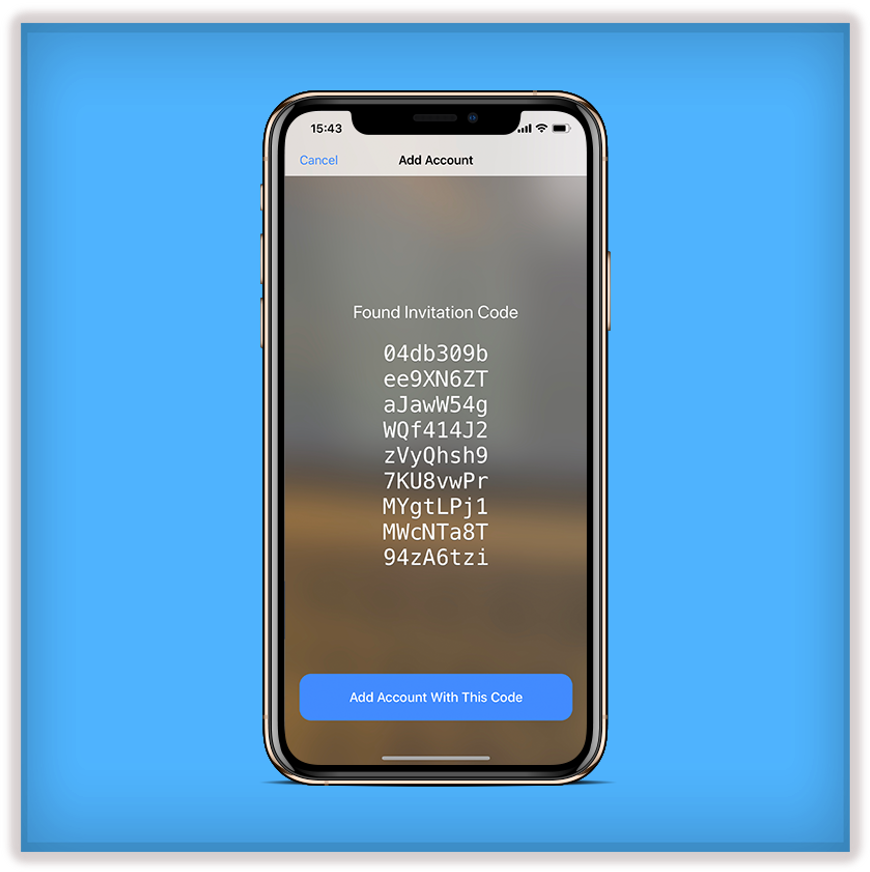 The interface and navigation options of the mobile app are designed to benefit the majority of end users, who generally have a single account (enrollment) and do not need to open the app on a regular basis.

The Home screen opens by default when the app is launched. Most functionalities are available either directly on the Home screen, or are accessible with a single click.

The Home screen lets users easily view their most recent authentication requests as well as basic information about their accounts. Users can tap View All to open the History screen, which lists all previous authentication requests. Tapping an account opens another screen with additional account details and options. 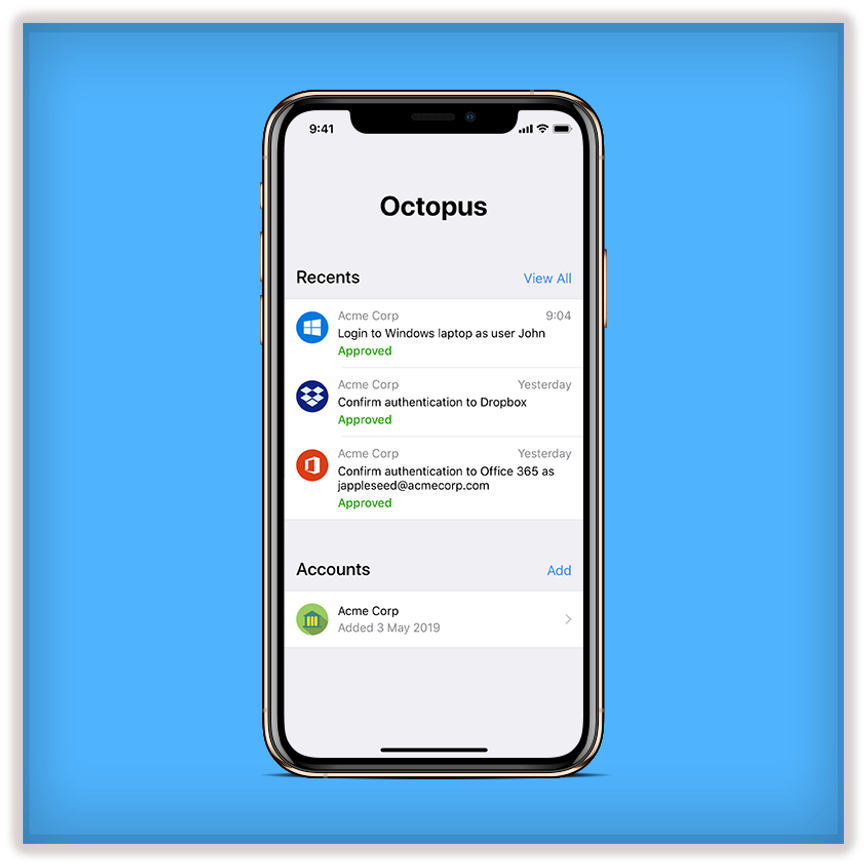 Approved on Another Device

If users have more than one device, the mobile app is immediately updated when an authentication request is approved or denied on another device. 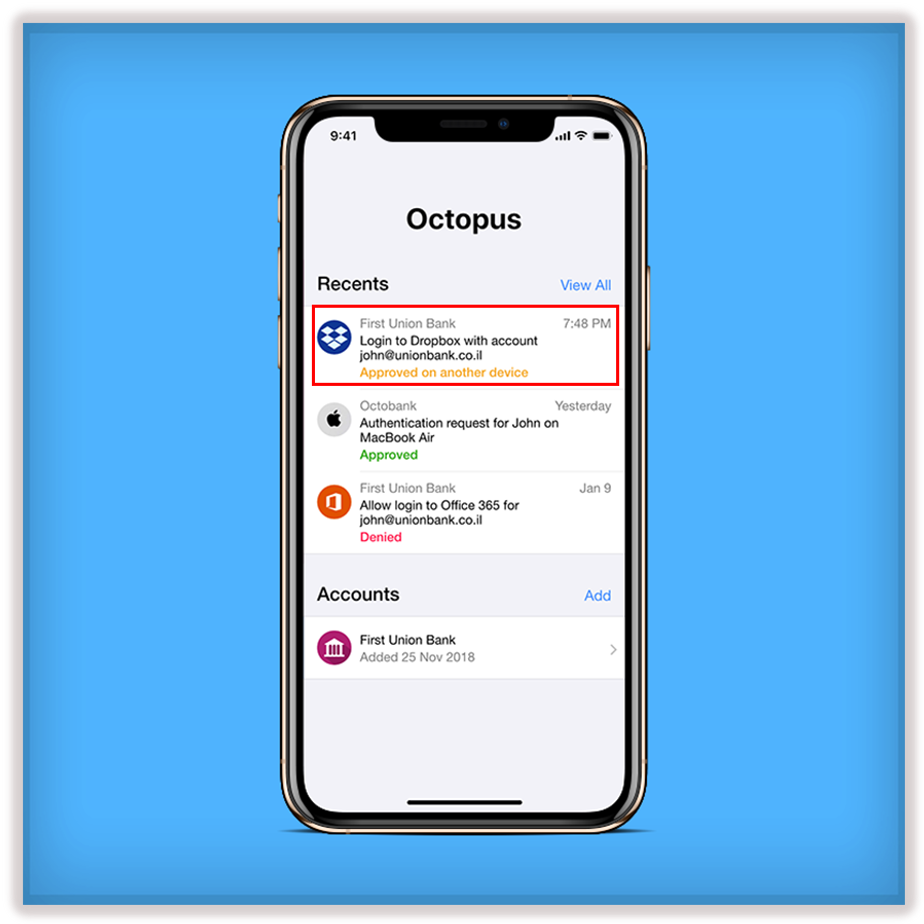 The Credentials popup enables users to view and work with passwords and tokens that have been generated for their account(s). The popup is opened from the Home screen by right-swiping across the row of the account and then tapping Credentials.

Alternatively, users can open the popup by tapping the row of the account (to open the Account details page) and then tapping Show Credentials. 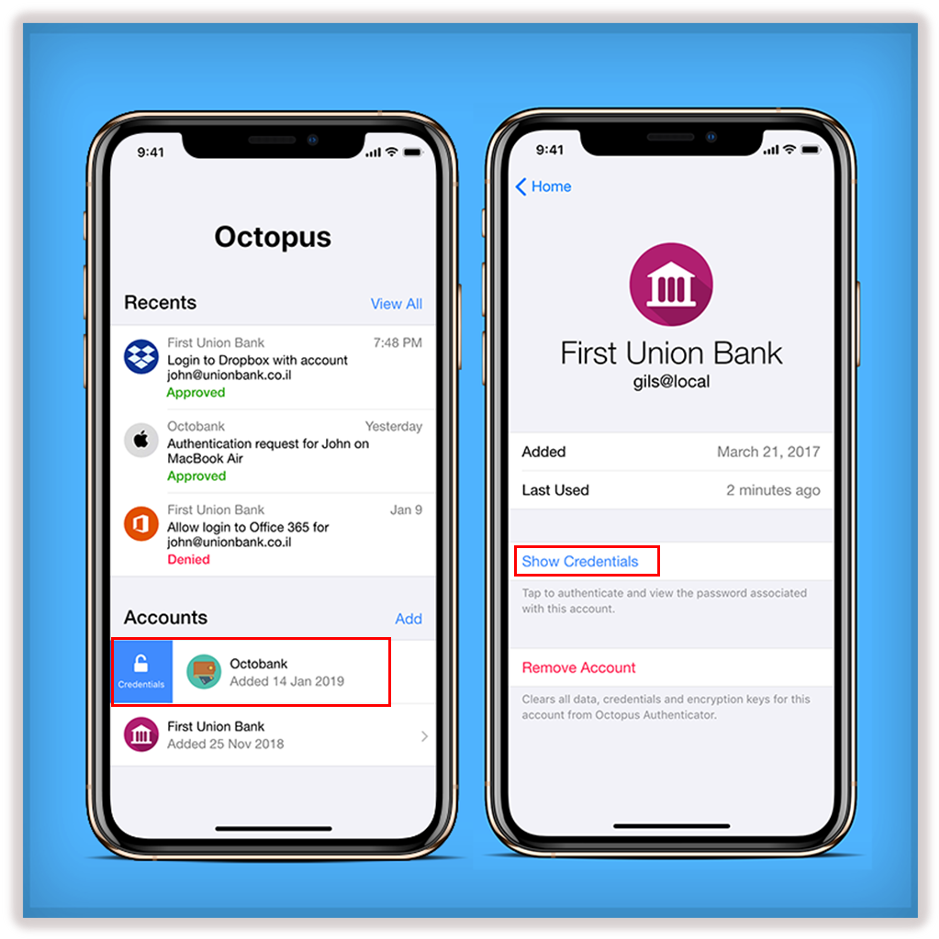 The Account Details page opens when users tap an account in the Accounts list (on the Home screen). This page displays more information about the selected account, as well as options to open the Help screen, open the Credentials popup, and remove the account.

Working with the Help Screen

To assist communication with support teams and facilitate rapid resolution of any issues that users encounter, the Help screen displays the Octopus Authenticator version and various account details. 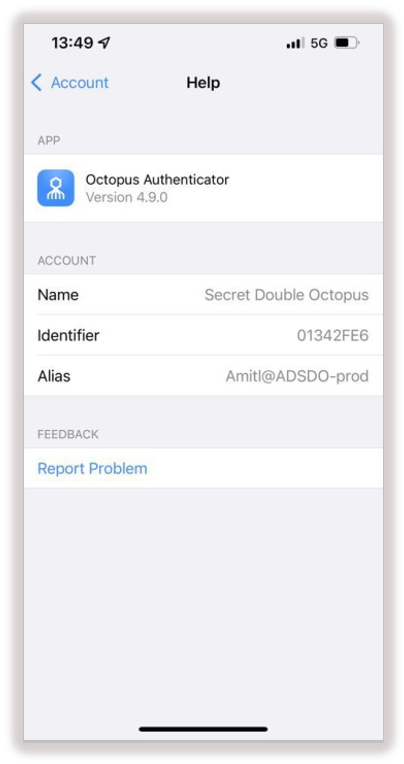 The Feedback portion of the Help screen allows users to easily report issues. When users tap Report Problem, a report which includes account details and a log file, is automatically generated. When users send the report by email, the subject line is prefilled and the company support email appears automatically in the CC list.

Users who obtain a new phone to replace an old device need to transfer their account to the new device. Transferring an account is done in one of the following ways: 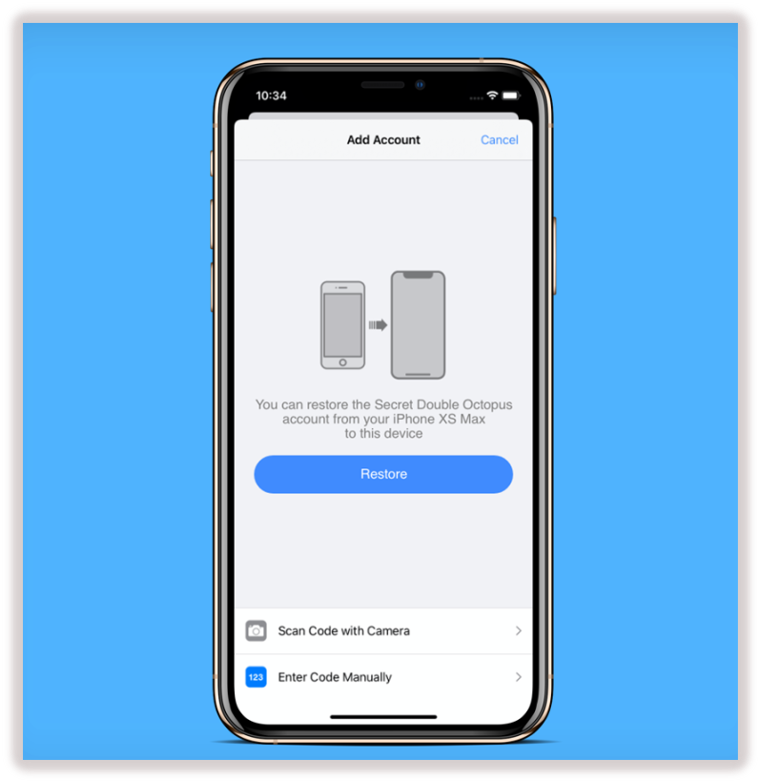 Was this article helpful?

Thank you for your feedback

Sorry! We couldn't be helpful

Thank you for your feedback

We apprciate your effort and will try to fix the article

Articles in this folder -